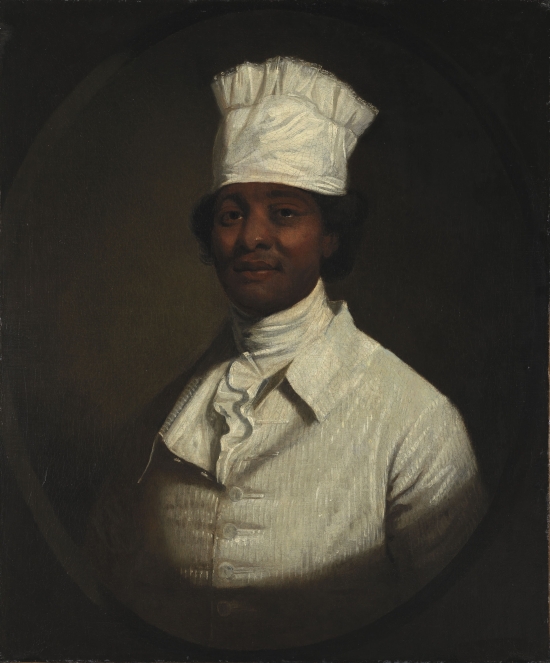 Gilbert Stuart was the Annie Liebovitz of his day: Every power player wanted to sit for one of the painter’s portraits, and many did, including six sitting presidents, many of their wives, congressmen, merchants, and “influencers” of the era. No doubt you’d recognize his most famous work: the George Washington portrait Dolly Madison saved from the burning White House during the War of 1812.

That said, looking at a gallery of Stuart’s work becomes tedious. It’s white face after white face, powdered wig after powdered wig — but wait, here’s someone interesting: the only person of color in his collection. It’s a man known only as Hercules, George Washington’s enslaved chef.

Details about Hercules’ life are scarce, but it’s estimated he was born sometime around 1754. We know that in the late 1760s, he was a ferryman for one of Washington’s neighbors, and that he continued this work when Washington bought him in 1767. Clearly Hercules impressed his new owner, because by 1786, he was the General Washington’s head chef, concocting dishes that were renowned across town, and beyond.

Martha Washington’s grandson, G.W.P. Custis, later noted, “[Hercules was] a celebrated artiste … as highly accomplished a proficient in the culinary art as could be found in the United States.” Custis also described Hercules as “one of the most polished gentlemen and the veriest dandy” of the era. So striking was Hercules in dress and demeanor that “many were not a little surprised on beholding so extraordinary a personage, while others who knew him would make a formal and respectful bow.” It’s little wonder then that the Washington family let beloved and revered Hercules sit for Stuart. Hell, they probably even paid for it.

Later, in 1790, now-President Washington brought Hercules and eight other enslaved people to Philadelphia, where the Gradual Abolition Act said visitors could only hold slaves for six months; after that, said slaves were freed. This bolstered Hercules’ hopes that he would someday be free, but Washington had other ideas — he left Hercules behind at Mount Vernon following a winter break, demoting him from chef to garden laborer. Some suggest Washington did this because he didn’t need so experienced a cook over the winter, while others suggest the more likely explanation: Washington hoped to prevent Hercules from being free.

Whatever Washington’s motivation, Hercules wasn’t having it: he escaped Virginia in February of 1797 and lived as a wanted fugitive for two years, until Washington’s death, when all of the president’s slaves were freed. No one knows whether Hercules ever got the message: last anybody heard, in December of 1801, Hercules was living in New York City, free at last.