Just a heads up: I’m currently transitioning In Case You’re Interested over to Medium.

It will have the same historic and political slant as this version of the site, plus the addition of interviews, more comic book coverage, and potentially some short fiction. We’ll see. We’ll also see how long this move to Medium lasts – could be brief or could be forever. Only time will tell!

That said, please visit my new page over at Medium. I’m still moving content over and hope to have it all together by the end of the week. Again, we’ll see.

Thank you for your support so far!

Writer Tom Wolfe, who died this week yesterday at age 88, will long be remembered for pioneering immersive New Journalism via articles on stock car racers, test pilots, celebrities, the well-heeled and dredges alike, most of which were first published at mar New York, Esquire and Rolling Stone. The latter of those publications also serialized his tale Bonfire of the Vanities, a scorching excoriation of upper class American values, or lack thereof. Yet while these narratives are wonderful, the white suit-wearing Wolfe must also be commemorated for his singular impact on our contemporary vernacular.

Not since Benjamin Franklin, coiner of words like “battery,” “condense” and “conductor,” has an American writer had such an expansive, widespread impact on the American language. But Tom Wolfe’s contributions to our vocabulary weren’t just everyday words; they were descriptive phrases that summed up American characteristics. It was Wolfe who popularized terms like “Good Old Boy” and “Radical Chic,” terms that are as ingrained in our vernacular as “apple pie” The first, Good Old Boy, comes from his 1964 profile of North Carolina stock car racer Junior Johnson:

“A good old boy, I ought to explain, is a generic term in the rural South referring to a man, of any age, but more often young than not, who fits in with the status system of the region. It usually means he has a good sense of humor and enjoys ironic jokes, is tolerant and easygoing enough to get along in long conversations at places like on the corner, and has a reasonable amount of physical courage.”

Though Wolfe borrowed the term from the locals, it was he who brought the “good old boy” national renown, and even a modicum of respect.

Meanwhile, at the opposite end of the socioeconomic spectrum were the “radical chic” men and women he called out in a 1970 article ridiculing wealthy celebrities, namely Leonard Bernstein, for cozying up to Black Panthers. Wolfe had no beef with the Panthers; he just found rich folk flocking around fashionable leftists to be an “affectation of worldliness.” And thus “radical chic” would become an epithet of sorts, quite the opposite of “the right stuff,” a phrase Wolfe introduced nine years later, in 1979. Though his usage there was in the context of elite pilots and astronauts, “the right stuff” spread to other occupations and venues, becoming an intangible, American version of “Je ne c’est quoi.”

But Wolfe’s greatest, most expansive coinage came in 1976, right between “radical chic” and “the right stuff:” “The Me Decade,” Wolfe’s descriptive expression for the ego-driven, self-help-seeking 1970s, when atomized individuals, flush with post-war cash, tried to break free from bourgeois bondage and personal hells at Erhard Seminars Training sessions and other outgrowths of what he called America’s Third Great Awakening. Where the first two Awakenings had placed God at the apex of existence, this latest iteration put the individual first.

“…Once the dreary little bastards started getting money in the 1940s, they did an astonishing thing—they took their money and ran. They did something only aristocrats (and intellectuals and artists) were supposed to do—they discovered and started doting on Me! They’ve created the greatest age of individualism in American history! All rules are broken! The prophets are out of business! Where the Third Great Awakening will lead—who can presume to say? One only knows that the great religious waves have a momentum all their own. Neither arguments nor policies nor acts of the legislature have been any match for them in the past. And this one has the mightiest, holiest roll of all, the beat that goes . . . Me . . . Me . . . . Me . . . Me.”

I’ve been away from the site for far longer than I intended, for which I apologize. It will be another few days before the regularly scheduled program starts cranking again, as I continue clearing my desk of pesky editorial debris.

First, “The Congressman Who Warned Us About Climate Change in 1864,” which I wrote for The Daily Beast in honor of Earth Day.

A few days later Mental Floss published my piece “How the Log Cabin Became an American Symbol,” which is a great condensed summary of my book, for those of you who are interested in quirky but critically rigorous American histories.

Alright, off to shovel more vowels and consonants. Be back soon….

Artist and writer Anita Willets-Burnham took two trips circumventing the globe, first in 1921 and again in 1928, and both times she brought her four children. She wanted to show them the world outside the classroom.

In 1930, she wrote about these travels – and how to afford them – in a memoir-meets-budget travelogue  called Round the World on a Penny. Above is an image of the 1940 reedition of the best-seller, which boasts probably the best book cover in history, esp. the little monkey in the bottom right. 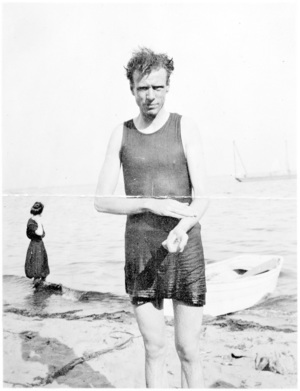 On the occasion of the 133rd birthday of Sinclair Lewis, Nobel-winning novelist of works like Babbitt, Elmer Gantry, It Can’t Happen Here and Arrowsmith, all of which deal with the tension between rote-loving mainstream society and unique thinking, here is an excerpt from Main Street, which I originally cited in 2011 at the LGBTQ news site Towleroad.

This blurb deals with a small town reaction to a man who doesn’t fit gender norms:

“Mrs. Dyer was bubbling, ‘Oh, have you folks heard about this young fellow that’s just come to town that the boys call ‘Elizabeth’? He’s working in Nat Hicks’s tailor shop. I bet he doesn’t make eighteen a week, but my! isn’t he the perfect lady though! He talks so refined, and oh, the lugs he puts on–belted coat, and pique collar with a gold pin, and socks to match his necktie, and honest–you won’t believe this, but I got it straight–this fellow, you know he’s staying at Mrs. Gurrey’s punk old boarding-house, and they say he asked Mrs. Gurrey if he ought to put on a dress-suit for supper! Imagine! Can you beat that?

‘And him nothing but a Swede tailor–Erik Valborg his name is. But he used to be in a tailor shop in Minneapolis (they do say he’s a smart needle-pusher, at that) and he tries to let on that he’s a regular city fellow. They say he tries to make people think he’s a poet–carries books around and pretends to read ’em. Myrtle Cass says she met him at a dance, and he was mooning around all over the place, and he asked her did she like flowers and poetry and music and everything; he spieled like he was a regular United States Senator; and Myrtle–she’s a devil, that girl, ha! ha!–she kidded him along, and got him going, and honest, what d’you think he said?

‘He said he didn’t find any intellectual companionship in this town. Can you BEAT it? Imagine! And him a Swede tailor! My! And they say he’s the most awful mollycoddle–looks just like a girl. The boys call him ‘Elizabeth,’ and they stop him and ask about the books he lets on to have read, and he goes and tells them, and they take it all in and jolly him terribly, and he never gets onto the fact they’re kidding him. Oh, I think it’s just TOO funny!'”

If you haven’t read this work, or anything by Lewis, I really suggest that you do.

The Oxford English Dictionary debuted on this date in 1884. It soon became a go-to glossary the world over, and expanding its enormity exponentially, so much so that in 1900 the wires ran this rundown of impressive OED-related statistics, i.e.: column lengths vis-à-vis equivalent geographical distance, etc.

And the OED continues to grow, adding new words every year. This year’s freshman lexemes include “ransomware,” “me time,” and “dickish,” which could be synonym for another new entry, “mansplaining.” HBD, OED!

Today marks the 70th anniversary of The New Yorker publishing JD Salinger’s short story “A Perfect Day for Bananafish,” the first of the author’s many stories to a) appear in The New Yorker and b) to feature a member of the Glass Family, the intelligent, quirky and wealthy New York brood from which Salinger drew so much inspiration. They were the original Tenenbaums.

Iconic today, the story wasn’t originally called “A Perfect Day for Bananafish.” It was, simply, “The Bananafish.” Unhappy with the initial narrative arc they received in January of 1947, as well as the title, William Maxwell and Gus Lobrano sent it back to Salinger for revisions, which took a year of back-and-forth consultations — until finally, in January of 1948, receiving a final draft entitled “A Fine Day for Bananafish,” Lobrano decided “Perfect” was better than “Fine,” and published the story under the title we all know today. It was a sensation.

If you’re unfamiliar with “Bananafish,” it’s about Seymour Glass, the second oldest child of the family, but while Seymour’s alive and well – for now – he’s suffering. Much like Salinger himself after the war, Seymour’s having trouble returning to civilian life, what with the horrors of global conflict seared into his memory. On a Florida vacation with his wife, Seymour’s stuck in a quagmire of depression, acting as the nexus for broader social alienation, bellicose brutality, mental deterioration and society’s willful ignorance of all. A crushing story, it’s publication cemented Salinger’s reputation as a beguiling and beautiful writer. And it only took him a year of edits! That’s refreshing for anyone struggling with their own words these days.

Anyway, if you’d like to take a look at the story and don’t have a New Yorker subscription, it’s included in Nine Stories, a PDF of which can be found here.

In lieu of Tuesday’s traditional Word Play post, here are a few John Steinbeck quotes on the agony and ecstasy of being a writer. Mostly agony.

These quotes come from his 1953 essay “My Short Novels,” which originally appeared in the Literary Guild Review’s periodical, Wings, and which was reprinted in America and Americans, a collection put out by Penguin Classics.

The first note regards the writers’ complicated relationship with their work, how passion fades once the piece is done and gone:

“It is true that while a work is in progress, the writer and his book are one. When a book is finished, it is a kind of death, a matter of pain and sorrow to the writer. Then he [or she] starts a new book and a new life… The writer, like a fickle lover, forgets his old love. It is no longer his own: the intimacy and surprise are gone.”

And of these stories, “thrust out into an unfriendly world to make their way”? “They have experiences, too — they grow and change or wane and die, just as everyone does. They make friends or enemies, and sometimes they waste away from neglect.” 😦

Finally, after recounting how his first three novels failed to sell out, and how the $90 he earned from The Red Pony seemed like “more money than I thought the world contained” and encouraged him to continue, Steinbeck notes, astutely:

“It takes only the tiniest pinch of encouragement to keep a writer going, and if he gets none, he sometimes learns to feed even on the acid of failure.” It’s true. We writers are kind of like those sea creatures that feed off of noxious gases spewing from oceanic anuses, only less cute.