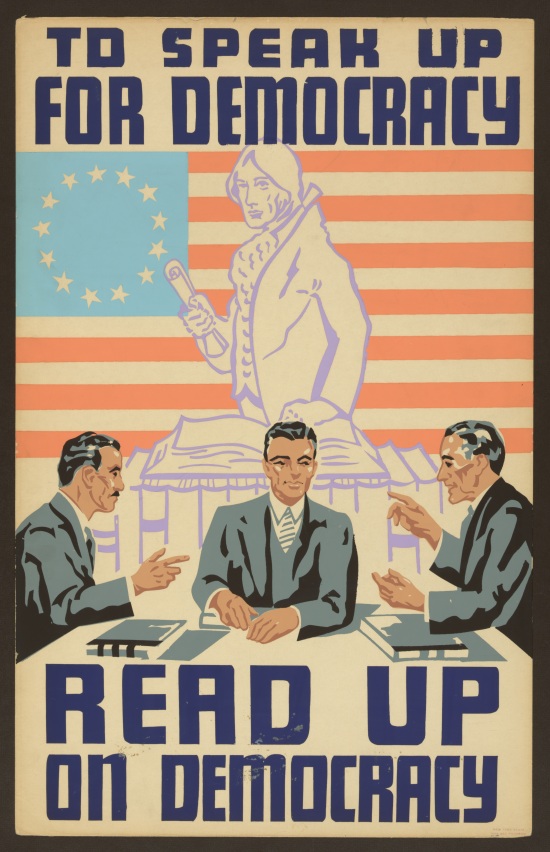 Tuesday is traditionally the day book publishers release their latest titles. No one knows why they do this on Tuesdays. Literally no one.  Some say believe it’s about optimizing best-seller results; some say that it’s to make life easy for distributors. But whatever the reason, I’m celebrating this week’s new book day with FIVE sets of vintage posters celebrating the written word, all sourced from the Library of Congress.

The first gallery is perhaps the most relevant to today: created between 1935 and 1942 by the government-backed Works Progress Administration, they urge patriotic Americans to embrace books as democratic tools. “To speak up for democracy, read up on democracy,” reads one, while another insists “Books are Weapons.”

In an era defined by a famously anti-intellectual president’s existential threat to our nation’s most storied institutions and norms, these are important reminders.

The second set of posters, born from a World War I collaboration between the Society of Illustrators and the Committee on Public Information, implores Americans to send books “over there” for our troops.

Similarly, the fourth gallery celebrates Book Weeks from between 1949 and 1964. It’s fascinating to see the aesthetic shift over the years – and keep your eyes peeled for a piece by Maurice Sendak.

Meanwhile, the fifth and final collection, created by the National Association of Booksellers way back in the 1920s, suggests you buy books as gifts – advice I endorse any day of the week!

Read up on Democracy:

See the rest AFTER THE JUMP!