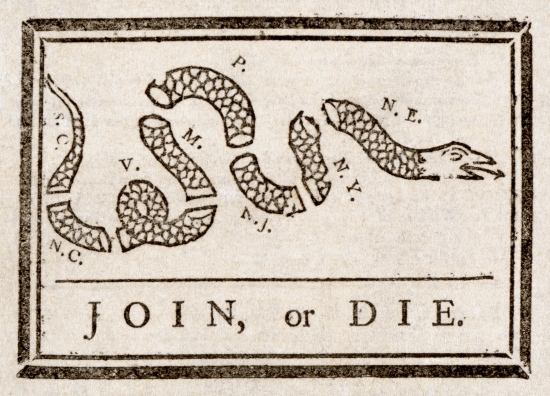 The “Join, or Die” snake is one of America’s most recognizable, beloved and replicated icons. Emblazoned on flags and t-shirts, pillow cases and iPhone cases, and even on tv show title cards and in comic books, the image is upheld today as a both specifically as an emblem of American independence, and generally as bid for unity against a common oppression. But the world’s most adored reptile didn’t start this way.

Created by Benjamin Franklin in 1754, the “Join, or Die” snake originally signified loyalty to the English empire. It wasn’t a call to action, but an order to fall into line. It was only later that “Join, or Die” evolved into a revolutionary rallying cry — and when it did, it became America’s first meme, too.