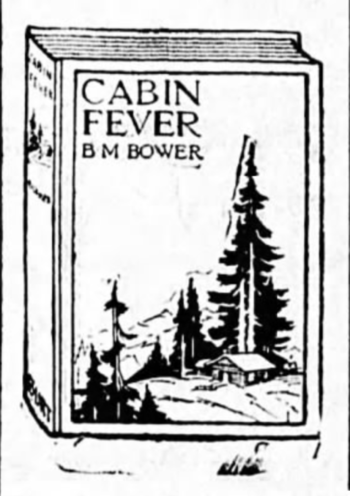 No matter what Punxsutawney Phil may say, there are still six weeks of this seemingly eternal winter, and many of us are starting to feel the claustrophobic anxiety colloquially called “cabin fever,” a term that happens to have just turned 100.

Originally association with typhoid fever, the more familiar definition arose with the January 1918 publication of a western-set novel Cabin Fever, about a man named Bud who, feeling suffocated by being a husband and father, leaves his wife and becomes friends with a prospector named Cash. The author? BM Bower, pen name for a woman named Bertha Muzzy Sinclair, who wrote 57 western-themed novels, many of which were best-sellers and 18 of which were made into short and/or feature-length films. But none had the lingual or cultural  impact of “cabin fever.”

The Cincinnati Enquirer defined “cabin fever” as “that irritation and temper, that quarrel-breeding state of mind that comes to those whose lives are too confined and monotonous without action of variety;” and The New York Times noted, “It is the common disease of overwhelming domesticity.” And though Virginia’s Times Dispatch pegged the condition to western life — “There is a certain malady of mind induced by too much monotony: fashionable folk call it ennui, but Westerners call it ‘cabin fever.’” — the term was equally applicable to eastern elite who, shell-shocked by WWI, ensconced themselves in log cabins in places like the Adirondacks and the Poconos. [I write about this briefly in my book: The Log Cabin: An Illustrated History.]

In any event, try to keep your head about you as winter thaws. It’s a ways off, but it will happen… I hope….