Keep the tradition alive this winter by immersing yourself in a narrative more timeless than any Christmas story, and more chilling: Caroline Hagood’s Ghosts of America: A Great American Novel (Hanging Loose Press).*

The central hauntee here – the Scrooge – is Herzog, a middle-aged, misogynistic author famous for his “biographical novels” of even more famous women. His first big hit was about Valerie Solanas, the woman who shot Andy Warhol. Now he’s turned his pen toward Jackie Kennedy – and it’s not going well. Probably because Herzog’s too obsessed with his aging, drunken body, his faltering inspiration, and his incessant peeping on a young woman across the alley.

Herzog knows he’s objectifying this woman – just as he knows he objectifies the women he writes about. It’s all wrong and he’s disgusting – and yet he persists. He’s both aware of and ashamed of his flaws but only because that shame lets him maintain his flaws with less guilt.

He’s such a major pig that when a fortune teller warns his life will be visited by spirits who look like beautiful women, Herzog says, “I think I salivated a little hearing that one.” He soon changes his tune.

END_OF_DOCUMENT_TOKEN_TO_BE_REPLACED 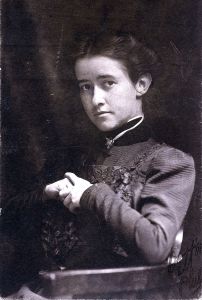 For today’s Found in the LOC, feast your eyes on over two dozen works by Elizabeth Shippen Green.

Inspired and encouraged as a child by her artist father, the exceptionally talented illustrator was first published in 1889, at age eighteen, and Green’s six decade career included contributions to popular and venerable publications Philadelphia Times, Women’s Home Companion, and the Saturday Evening Post, as well as to Harper’s magazine, with whom she signed an enviable exclusive contract in 1901, at age 30. She was the publication’s first female staff member.

Though Green’s gender was unique in the booming field of illustrators at the time, she was hardly alone: she was part of a growing generation of female artists, and, along with Jessie Willcox Smith and Violet Oakley, was part of a posse known as the Red Rose Girls, named after the inn where they lived and worked together in Philadelphia.

Despite what television producers from Aaron Spelling to Andy Cohen would like you to believe, Green and her contemporaries weren’t prone to back-stabbing or cat-fights. On the contrary, they were known for advocating for one another, helping others who typified that era’s “New Woman,” that is: women who left the kitchen and made it on their own. (This “New Woman” was the foremother of the “career woman” of the eighties and today’s “Liz Lemon” trying to“have it all,” because even a century after Green signed with Harper’s, society still has to label/problematize women who dare do what men do all the time, through all of time.)

Anyway, in celebration of Green’s trailblazing career, I’ve rounded up 25 of the nearly 200 of her images found at the Library of Congress’ website. Some are included simply because they’re gorgeous; others because they’re gothic, a favorite genre of Green’s and some of which remind me mightily of Charles Vess’ work on DC Comics’ Books of Magic series; and others are included simply because of their titles: Removed from the context of the stories they illustrated, some are given new weight against the backdrop of contemporary debates over gender and sex –. I particularly like the ones that appear to invert gender stereotypes, e.g. image #13, “Monsieur Brisson visibly shuddered and paled.” — others are just amusing, like image #22, “I observed it, a new ceiling.” LOL!