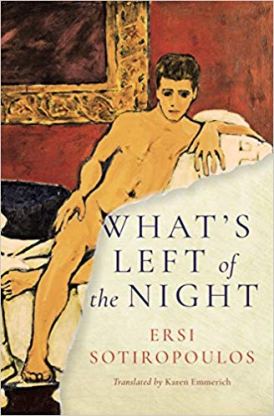 Exquisitely translated by Karen Emmerich, What’s Left of the Night delves into more than Cavafy’s personal experiences as a man struggling with his same-sex desires in restrictive era. It shines a light on far more universal debates about the nature of art in an ever-changing world. Does art bring people together or form a barrier? How is artistic success defined? And when does artistic desire become obsession?

These enthralling topics aside, I’d like to call out Sotiropoulos’ masterful description, and Emmerich’s resonant translation, of walking through the city.

As someone who spent 12 years in New York, where walking is a way of life, before moving three years ago to Atlanta, where the car is king, this passage sparked pangs of nostalgia for the biped life.

Here, for your enjoyment, is that excerpt. It takes place just as night falls across Paris and a young  Constantine Peter Cavafy takes a solo stroll. While the backdrop’s the City of Lights specifically, the vibe translates to any bustling urban environ:

“He soon began to feel better. The current of the crowd flowed in the direction of the grand boulevards, over wide sidewalks dotted with cafes, beneath awnings and into arcades where strangers’ silhouettes fleetingly took shape, then vanished again.

A blind river pulled him into its current. He inhaled deeply and followed that vibrant ripple in the hum and dust. Crowds overflowed the intersections, lingered at shop windows before indolently setting off again beside stylish coaches and one-horse buggies that clattered away into the lilac night. Newspaper boys on street corners bellowed out the latest news. Where the road met Rue des Pyramides he stopped and stood as if hypnotized. Faces rushed toward him, shattering as they passed. The traffic began an utter crush at Rue di Rivoli, where the arches of the Lourvre loomed like a domed seawall. Groups of friends disappeared down side streets. Their stroll would no doubt take them, later on, to more remote districts, off the beaten path. Secret, ill-famed neighborhoods. Shadowy doorways and basement rooms, he though, feeling a flutter within.

A mob of musicians was just ahead of him, lurching this way and that, laughing and shouting drunkenly. One of them was dragging a monkey by the hand, dressed like a soldier with a little cap. He increased his speed so as to overtake them. Light flooded the paving stones, spread over the facades of the buildings, trailed over the silvery roofs — a fluid, shadowless light. As he walked, the lines of a poem he was writing came to mind. Every so often he would pick it up, poke and prod, then let it be. He had looked back at it recently and had been satisfied. Very satisfied. It didn’t happen often. The musicality was flawless, the rhyme effective:

The city will follow you. The roads you wander will be

The same. And in the same quarters you’ll grow old, and see.”

What’s Left of the Night is out now from New Vessel Press, an independent publishing house devoted to translated literature and narrative nonfiction, and I’m happy to add it to All the LGBT Books Around My House.