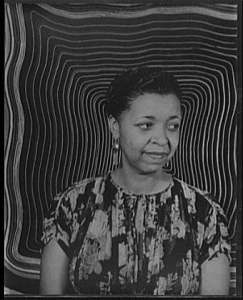 The great migration of American black people from the South to the North coincided with a general urbanization of America: a trend of people, all people, hightailing it from rural environs and decamping in concrete jungles. These mass movements led to all sorts of cross-cultural fusions and new freedoms of assembly, and this was especially true for LGBT people who now saw and met and loved other people like themselves. After years of thinking they were the only one, they found groups of like-minded friends.

By the 1920s, black lady lovers had more places to meet one another than ever before, such as the popular entertainment industry, which encompassed segregated forms of black vaudeville, the spectacle of black musicals, and the rapidly expanding market for “race records”—later renamed “rhythm and blues.”

Popular performing women like Bessie Smith and Ethel Waters (pictured)  subtly hailed their audiences with veiled references to homosexuality and took advantage of the privacy and liminal space of touring life to enact same-sex relationships on the road.

It’s a fascinating look at a population often overlooked in black, female and queer histories and you should read it.