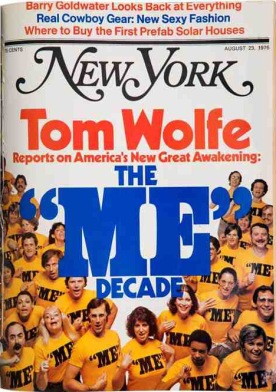 Writer Tom Wolfe, who died this week yesterday at age 88, will long be remembered for pioneering immersive New Journalism via articles on stock car racers, test pilots, celebrities, the well-heeled and dredges alike, most of which were first published at mar New York, Esquire and Rolling Stone. The latter of those publications also serialized his tale Bonfire of the Vanities, a scorching excoriation of upper class American values, or lack thereof. Yet while these narratives are wonderful, the white suit-wearing Wolfe must also be commemorated for his singular impact on our contemporary vernacular.

Not since Benjamin Franklin, coiner of words like “battery,” “condense” and “conductor,” has an American writer had such an expansive, widespread impact on the American language. But Tom Wolfe’s contributions to our vocabulary weren’t just everyday words; they were descriptive phrases that summed up American characteristics. It was Wolfe who popularized terms like “Good Old Boy” and “Radical Chic,” terms that are as ingrained in our vernacular as “apple pie” The first, Good Old Boy, comes from his 1964 profile of North Carolina stock car racer Junior Johnson:

“A good old boy, I ought to explain, is a generic term in the rural South referring to a man, of any age, but more often young than not, who fits in with the status system of the region. It usually means he has a good sense of humor and enjoys ironic jokes, is tolerant and easygoing enough to get along in long conversations at places like on the corner, and has a reasonable amount of physical courage.”

Though Wolfe borrowed the term from the locals, it was he who brought the “good old boy” national renown, and even a modicum of respect.

Meanwhile, at the opposite end of the socioeconomic spectrum were the “radical chic” men and women he called out in a 1970 article ridiculing wealthy celebrities, namely Leonard Bernstein, for cozying up to Black Panthers. Wolfe had no beef with the Panthers; he just found rich folk flocking around fashionable leftists to be an “affectation of worldliness.” And thus “radical chic” would become an epithet of sorts, quite the opposite of “the right stuff,” a phrase Wolfe introduced nine years later, in 1979. Though his usage there was in the context of elite pilots and astronauts, “the right stuff” spread to other occupations and venues, becoming an intangible, American version of “Je ne c’est quoi.”

But Wolfe’s greatest, most expansive coinage came in 1976, right between “radical chic” and “the right stuff:” “The Me Decade,” Wolfe’s descriptive expression for the ego-driven, self-help-seeking 1970s, when atomized individuals, flush with post-war cash, tried to break free from bourgeois bondage and personal hells at Erhard Seminars Training sessions and other outgrowths of what he called America’s Third Great Awakening. Where the first two Awakenings had placed God at the apex of existence, this latest iteration put the individual first.

“…Once the dreary little bastards started getting money in the 1940s, they did an astonishing thing—they took their money and ran. They did something only aristocrats (and intellectuals and artists) were supposed to do—they discovered and started doting on Me! They’ve created the greatest age of individualism in American history! All rules are broken! The prophets are out of business! Where the Third Great Awakening will lead—who can presume to say? One only knows that the great religious waves have a momentum all their own. Neither arguments nor policies nor acts of the legislature have been any match for them in the past. And this one has the mightiest, holiest roll of all, the beat that goes . . . Me . . . Me . . . . Me . . . Me.”