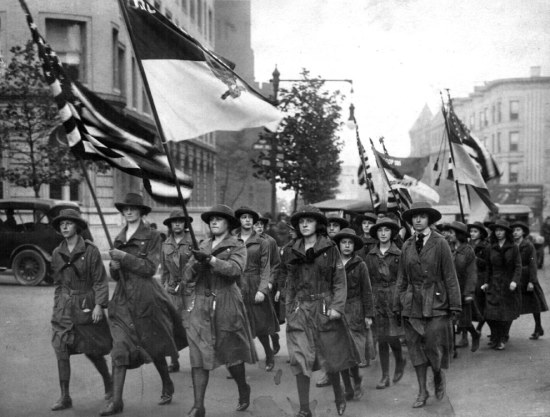 1. English Inspiration: Founder Juliette Gordon Low was overseas, saw the good that Robert Baden-Powell’s Scouting program was doing in the UK and decided to start her “Girl Guides of America,” specifically in Savannah, GA, where she gathered 18 young women and began a group that would change millions of lives.

2. Low wasn’t alone: There were already two similar “girl scout” groups here in the States: The Camp Fire Girls, first organized in 1910, but officially founded on March 17, 1912, a mere five days after Low’s, and the Iowa-based Girl Scouts of America, founded in 1910.

Low suggested mergers between her group and these two, but both declined.

The Girl Scouts of America eventually dissolved, and while The Camp Fire group still exists, but only boasts 200,000 members, compared to the more famous Girl Scouts’ 1.8 million. [Note: the “Girl Guides” changed its name to the “Girl Scouts of the United States” in 1913.]

3. Stand Up Girls: Though most famous today for their cookies, the Girl Scouts were formed so that young women, overlooked by society, could become self-reliant, showing that they were just as strong, capable and smart as boys upon whom society lavished so much attention.

4. Girl Scouts, Interned: One of the ugliest chapters  in American history was the rounding up and detention of Japanese-Americans during World War II, as well as German and Italians. Somehow, though, the young girls in these camps maintained some semblance of normalcy by forming their own Girl Scout troupes, funded in part by money from the Juliette Low memorial fund.

Between March 1942, when President Roosevelt signed the internment order, and 1943, nearly 750 young girls had joined Girl Scouts groups at camps in Arizona and Wyoming, with many of them taking the group with them when they were finally released in 1945.

5. Girl Scouts, Desegregated: Though there had been minority-led groups since 1917, when the first black Girl Scout troupe arose, the entire organization was a leader in desegregating in the 1950s, especially via color-blind summer camps like Camp Shantituck in Kentucky. The Girl Scouts’ efforts were so impressive and tireless that Martin Luther King described the organization as a “force for desegregation.”

6. They Accept All: On a similar note, the Girl Scouts made it clear in 2011 that they open their ranks to all girls, including trans girls.

“If the child is recognized by the family and school/community as a girl and lives culturally as a girl, then Girl Scouts is an organization that can serve her in a setting that is both emotionally and physically safe,” the organization said. And the Scouts are so committed to such inclusion that they turned down a $100,000 donation from a bigot who opposes equality. Hooray!