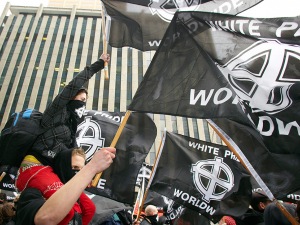 In a startling and revealing poll of 1,131 active duty soldiers, The Military Times found that 30% of respondents rank white supremacism as a greater national security threat than Syria (27%), Pakistan (25%) and ISIS-riddled Iraq (17%).

More than that, about 25% of those polled said they’d experienced or seen white supremacist attitudes while enlisted, which comes as no surprise considering all the military support for Donald Trump: 44% of troops approve of the he former reality show star who was catapulted to the White House in large part by racists and hate-mongers. And while most branches of the military are just as split as the country on Trump, the Marines are overwhelmingly in his camp: 58.9% of them gave Trump a thumbs up.

Despite all that frightening data, the most unsettling bit comes from this, via The Military Times:

Singling out white supremacist groups irritated some of the troops surveyed.

“White nationalism is not a terrorist organization,” wrote one Navy commander, who declined to give his name.

Also, it’s worth mentioning that others griped that “Black Lives Matter,” a peaceful movement hoping to end race-based violence, is a potential national security threat.