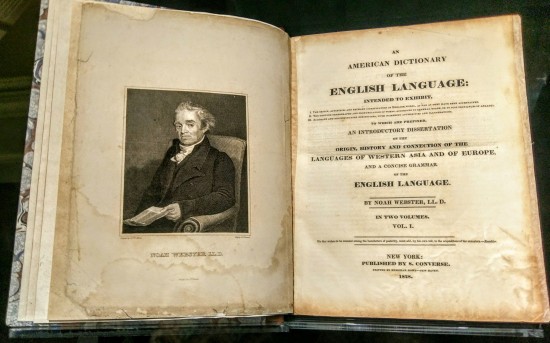 Happy National Dictionary Day! In case you’re not aware, every October 16 word nerds celebrate the 1758 birth of Noah Webster, the “Father of American Education.” While honoring the man who standardized American English may seem stodgy, Webster was actually quite the radical.

To Webster, education reform was about more than just reading and writing; it was about breaking free from England’s colonial influence. Rather than relying on Old World norms, the new, post-Revolution nation must create its own, for, as he said, “a durable and stately edifice can never be erected upon the moldering pillars of antiquity.” Relying on English standards would “stamp the wrinkles of decrepit age upon the bloom of youth and to plant the seeds of decay in a vigorous constitution.”

Webster believed that even seemingly slight changes, such as switching the “re” to “er” in words like “centre/center,” losing the extraneous “u” in “colour,” and swapping ‘c’ for ‘s’ in “defense,” were instrumental in coalescing a shared national language and identity, bolstering patriotism in the process. “[Education] may implant in the minds of the American youth the principles of virtue and of liberty; and inspire them with just and liberal ideas of government [and] an inviolable attachment to their own country,” he wrote in 1787, right after he developed the nation’s first text books. The dictionary that made him famous arrived in 1806 and was expanded over the next decades.

But Webster was revolutionary in another way, too. To Webster, a shared, standardized language was intrinsically populist, creating a language bankers and merchants alike could understand. Education had previously been reserved for the moneyed classes, but Webster wanted all Americans, rich and poor alike, to know their facts and figures. Well, all boys, at least, because he also believed that while women should know a bit of geography, math and of course know how to read, most “female education should have for its object what is useful,” i.e. sewing and cleaning.

Flaws in Webster’s gendered thinking aside, he was quite right in his belief that education was a powerful tool against tyranny past, present and future: “In despotic governments, the people should have little or no education, except what tends to inspire them with a servile fear. Information is fatal to despotism.”

Today, with anti-intellectualism running rampant and a president intent on suppressing the flow of information — “It is frankly disgusting the press is able to write whatever it wants to write,” was our reality show president’s most recent salvo in his ongoing war against the free press — Webster’s crusade for an American language and for American education needs to be celebrated and cherished now more than ever. In this age of tyrannical ignorance, let us all remember Webster’s words, “Americans, unshackle your minds, and act like independent beings. You have been children long enough, subject to the control, and subservient to the interest of a  haughty parent.”