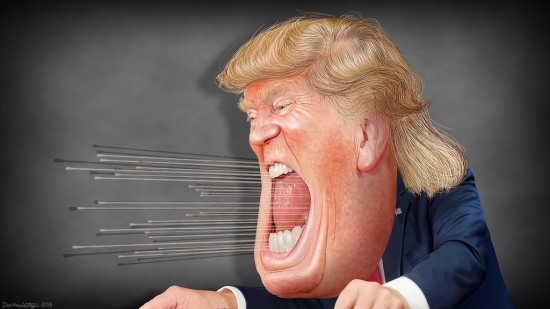 While we’re on the subject of the English language, let’s talk about “Trump.”

When used as a verb, U.S. president Donald Trump’s surname is most often interpreted as “to surpass” or “to beat,” a terminology familiar from card games. Such usage  was popularized in the 1580s, when Middle English reigned, and which traces its origins to around the 1520s, when “to trump” was first used as “to triumph.” But this is not the first “ to trump,” and while Donald Trump undoubtedly prefers this dominant definition, the first, which is worse, is far more fitting — and French!

You see, the Middle English “trump” came from an earlier definition, from the 1510s, when “to trump” meant “to deceive” or “to cheat,” a connotation that in turn evolved from the 14th century “trumpen,” which comes from the Old French “tromper,” or “to deceive.”

According to Etymology Online, this definition sprang from street shills who blared a trumpet to draw curious bystanders and then finagled them into buying “showy but worthless finery.” So, a “trumper” is a trickster who spouts attention-grabbing nonsense to hawk garbage, a definition that fits our Trump to a T.

PS: Added word fun: The French phrase trompe l’oeil, “trick of the eye,” or, literally “to deceive the eye,” is also derived from this older, far more Donald Trumpian term.